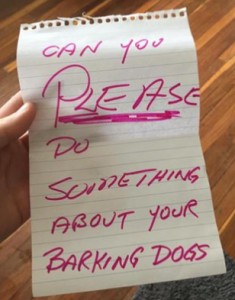 Specifically . . . barking dogs.  Do you have a dog barking non-stop in the neighbourhood?  Maybe your first instinct is to write an angry anonymous letter and leave it in the offending owner’s mailbox?  Perhaps you’ll just vent on the local community Facebook page, gain the sympathy of others but fail to address the owner of the problem at hand.

We found an article recently where a woman had posted “How do you deal with a neighbour when they’ve got an excessively barking dog?” after one Queensland woman shared the unnamed letter she received in her mailbox.

The woman, who wanted to remain anonymous, said she wished she had more information to help her solve the apparent problem.  “I would have loved for them to leave their details or at least times of day when they were barking as I was completely unaware that they were doing it,” she said.  “It [the letter] just felt very rude.”

Noise complaints are an issue wherever you go — one of the most common complaints relates to barking dogs.

We’ve done some digging around and come up with a handy guide on what to do if there’s a problem dog in your street, or what to do if you’ve been told your dog is disrupting the local area and you need help.

My neighbour’s dog won’t shut up — what do I do first?

Try talking to your neighbour first — face-to-face if you can.  Who knows, they may not even be aware of the problem. There may be a couple of reasons for that:

That angry note you’re thinking about writing might be the first they hear of it.  If you don’t want to chat to your neighbour about it, you can send them a (polite) letter.  Once you’ve either had that chat with your neighbour or sent them a letter and they’ve (hopefully) agreed to do something about the barking, wait a few weeks to see if they have been successful in their efforts.

I spoke with the neighbour and nothing’s changed – what now?

Now’s the time to get the local council involved – you can call them to report it.  Our Bass Coast Shire Rangers do get lots of barking dog complaints.  Their first step will be to contact the owner of the dog to advise that there is been a complaint, this step will hopefully allow the owner to remedy the situation.  As mentioned previously, The Shire believe that many dog owners are unaware that their dogs are barking and contact from the Ranger is the owners first opportunity to address.  They will generally give the dog owner a couple of weeks to remedy.

Council have been contacted. Now what?

If after this time, further complaints are received, council rangers will ask the Complainant to create a diary that documents the dates and times of when the dog is barking over a 2 week period.  The Complainant is also asked to supply a Statutory Declaration confirming that the diary is a true account of events.  The diary is then investigated by the council and if deemed to be excessive the council may issue a fine, if the matter continues, a court summons may be issued.  The Ranger we spoke to (Tina) advised that to date, a dog barking complaint had not ended up in court.  When dog owners are given the opportunity to remedy the situation, the matter is usually cleared up without further issue.

I’ve got a barking dog — what can I do about it?

The RSPCA are the experts here.  They say there are a number of reasons your dog may be barking, such as:

“In the first instance we recommend that you talk to your veterinarian who can provide advice and may refer you to an animal behaviourist (reward-based) who can help to determine the underlying cause of the barking and then develop a tailor-made humane treatment plan for your dog,” the RSPCA website says.  You can also contact your local RSPCA for advice.

Back to all news
Up to Date